Thirteen golfers from the Goulburn Murray and Dalhousie Districts combined to form a Hume team for the Junior Country Regions event held at Bendigo and Neangar Park Golf Clubs on Saturday 6 and Sunday 7 August.  The heavy early overnight rain made turned the Bendigo GC course into a real wet heavy track which made the going very difficult especially for the younger shorter hitter juniors.

In a repeat of two years ago at Ballarat, Goulburn Murray/Shepparton’s Bailey Goodall won the coveted Boys Country Championship.  Bailey returned 71 at Bendigo GC on the Saturday and shot a 69 at Neangar Park on Sunday a total of 140 which is 3 under par for the weekend.  Lachlan Smart from South West District (Geelong) finished second with 144.  Lucas Hales from Benalla who joined the GM Team shot 162 while Dalhousie’s Dylan Jack from Hidden Valley GC scored 171.

The photo below shows Bailey Goodall with the silverware: 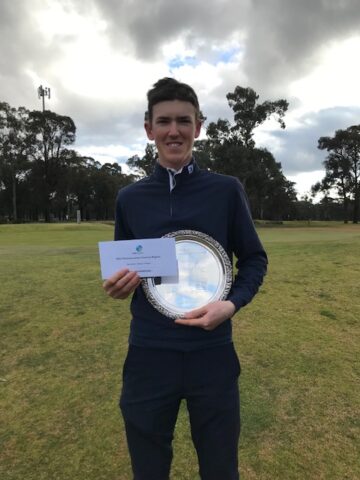 Young Kohen Haddrell from Cobram-Barooga at age 11, the youngest member of the team was not happy with 111 on Saturday but came good to shoot a 97 on Sunday.  Jasper Wallace from the North West District won the net event with a score of 137.   Jack Roberts Dalhousie (Woodend) scored 146.  GM’s Hudson Storer (Numurkah) started very well at Bendigo on Saturday with a 72 net but found the steeper Neangar Park course with its slick greens much harder going on Sunday.

In the girls scratch event Jazzy Roberts from Bendigo dominated returning scores of 67 and 75 for a total of 3 under 142.  GM’s Casey Chandler finished third with 80 and 86 = 166.   In the net event Casey finished equal second 69+76 = 145 net to be only one off the pace, and recorded the best net score for the Hume Team.

In the Teams events South West (Geelong) District won the scratch and North West District won the net event.  The Hume team were well behind with not enough depth or consistent scoring.  However, a special well done goes to all the Hume players for their attitude and perseverance in the tough going.  We will be a bit older and stronger next year. 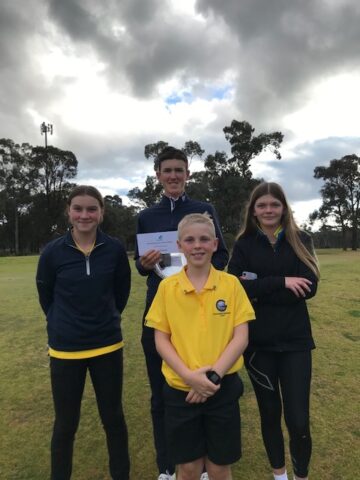