Although starting with a heavy shower of rain it soon changed to a very pleasant day on Sunday 24 July for the Goulburn Murray Golf District Interclub Pennant golf finals played at the magnificently presented Tocumwal Golf Course.

At the completion of the team matches for each Division GMGA President David Roberts and Captain Shane Halloran presented the runners up with a small memento of the event and the coveted GMGA towels and Pennants for the winning teams.  At each presentation the President commiserated with the runners up, congratulated the winners and thanked Tocumwal Club represented by Club Captain Roslyn Seymour for hosting the day and thanked Captain Halloran for organising the Pennant season.

In Division Five Hill Top Tatura played Nagambie, which turned out to be the closest team match of the day.  Wins to Barry Cryer and Graeme Galvin saw Nagambie in a good position. Mick Keen played steadily all day to returned a win for Hill Top; followed by Jeff McNaughton who was one down after nine holes, record a 2/1 win.  Two wins to each team.  David Cornwall and Dean Brown were even after eighteen holes and headed down the nineteenth which Hill Top team Captain Cornwall won and therefore registered the three wins to Hill Top against the two wins to Nagambie.  A Pennant goes home to Hill Top on the bus. 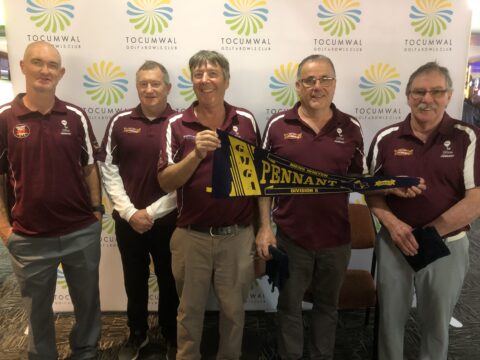 Hill Top Tatura was also in this final against Numurkah.  However Numurkah maintained their dominance, as they had for most to f the season to score and easy 4/1 win over Hill Top.  Adam Cook was too good for Tom Devine. Jordan Cleeland far too good for Danial Mahar while Mark Hegarty and Garry Hosie returned 2/1 wins over John Owen and Josh Danaher.  Jaydyn Armstrong’s 2/1 win over Brad Tweed was the only individual win for the Hill Top boys.  A highlight for Numurkah Team Captain Garry Hosie saw him win for the first time in winter pennant after many years steering Numurkah teams.  A well-deserved celebration for Numurkah. 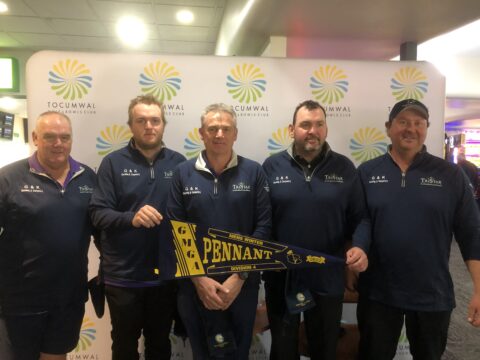 Kyabram Valley View went into the Division Three final against Cobram-Barooga undefeated all season.  Not always a good omen for pennant golf finals.  However, let there be no doubters the Kyabram men were true to form registering a decisive 4/1 win over the team from the River Murray. Greg Boyer got Cobram-Barooga off to a good start with a 2/1 win over Daryl Harrison. Here ended the River boys run.  The Kyabram Valley dwellers of Ed McQuienn, Miles Gould returned very strong wins over Greg Brooks and Darryl Matthews, and Dylan Gallivan and Ash Kuiper recorded close but good wins over David Wilson and Steve Coulston.   A new pennant flag will be flying in the Valley View clubhouse. 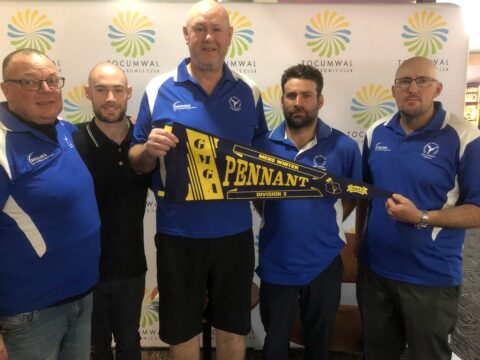 While Division Five, Four and Three are based on handicap play Division Two and One are played without handicap consideration and straight out scratch scores deciding each individual match.  Numurkah finished top of ladder in both Division One and Two.  In Division Two they took on Mooroopna who gained second place the previous week.   Two Mooroopna stalwart consistent players in David Young 2/1 over Glenn Thompson and Steve Haigh 3/2 over Sam Robertson registered good wins for Mooroopna. However, the consistency of Numurkah’s Brandan Hosie 4/3 win over Trent Mills, Jamie Ward 2/1 win over Wayne Mahar and Col McMein 1up win over James Ralph was just what Numurkah needed to gain the Pennant.

Well done Numurkah; wins in Division Four and Two.  Let’s also give great praise and respect to the spirit of the Numurkah Golf Club who had a big host of spectators at Tocumwal supporting their three Pennant teams.  It speaks highly of the Club. 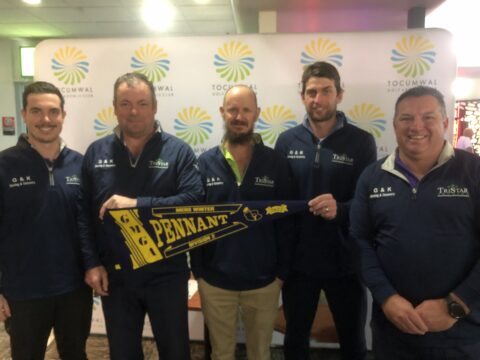 There was no doubt that the contest between Numurkah and Shepparton in Division One was to be a classic as some of the best golfers in the District were paired against each other.  Numurkah had gone through the season undefeated but at this level of golf top spot can be held by virtually one hole won or one great shot. Kevin O’Donoghue and Andrew Nichols were first off and went to the wire with O’Donoghue winning one up to get Shepparton started.  Mitch Grandell, who some said was inspired by Cameron Smith’s efforts at The Open, was four under the card on the front nine and continued great form for an easy win over Lincoln Ferrari.  One each after two individual matches. Another one up win this time to Numurkah’s Brett Wildes over Daniel Adem, which was then counteracted Shepparton’s Jeremy Rath with a win on the eighteenth over Nick Ludington.  The two team Captains were the final pairing and Luke Dixon scored a 2/1 win over Numurkah’s Andrew Storer to clinch a 3/2 win for Shepparton.  As could be expected when the best golfers play, three of the five individual matches finished at the eighteenth and one at the seventeenth.   You can’t get much closer than that.  A proud win for Shepparton giving them four final wins in a row over the past five years, with one year missed because of the Covid pandemic. 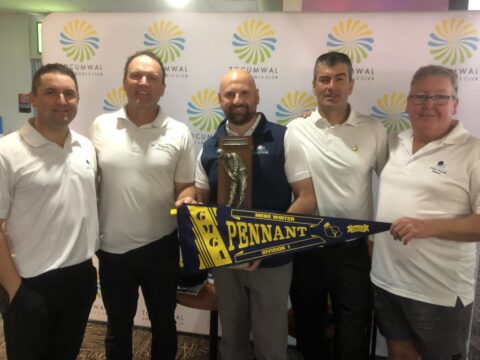 Interclub Pennant now gets a rest until summer.  However, on 28 August Super League for the District’s best players (handicaps of 7 or better) starts at Cobram-Barooga.