The Goulburn Murray Golf District Mixed Event played as American Foursomes or Pinehurst as it is also known was played at Kialla Golf Club on Sunday (1 May) in conjunction with the Club’s Frank Bush Memorial event.

A field of 76 players took part which was very pleasing for the organisers and represented another year of growth after the great year at Numurkah last year.  The growth of the event and the representation of golfers from many clubs and over a huge range of handicap abilities in the same field was emphasised by GMGA President David Roberts to all the participants at presentations.

President Roberts gave special thanks to Kialla GC for its support and cooperation for the event highlighting the work of the President Beryl Krake and Captains Sue Maynard and Ross Campbell along with the catering, bar and course volunteers 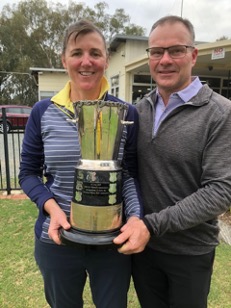 The scratch event Championships was won by Shepparton pair Kim Morris and Darren Duckworth with 72 off the stick to enable them the grasp the silverware (see photo).  In accepting the trophy Kim said “that it is one they always wanted to win and reiterated the Presidents words of how good it was to see a large field of players with a huge ranges of handicaps all enjoying the event”.  Runners Up – for the second year running- were mother and son team of Rowena Wallace and Chris Tomlinson from Cobram-Barooga with a score of 75.

In the handicap event, where the pairs have three-eighths of their combined handicap, for the coveted George Cronyn Memorial Trophy, Bec Jeffers and Glenn Newton from Hill Top Tatura won the day with a net score of 717/8. For the winners, organisers and those close to the event, this win had an extra element of enjoyment and significance, because George Cronyn, for whom the event is named after, was a former Hill Top Life Member.  Runners Up were Tracey Clouston and Garry Hosie from Numurkah GC with 721/8.  Amazing the small winning margin based on the handicap system.    Nearest the pins went to Rowena Wallace, Chris Tomlinson and Karla Ridd.

For the Kialla GC Frank Bush memorial event the emphasis was on the handicap rather than the scratch event and the four pairs mentioned above in the District event revolved around with Morris and Duckworth winning the Frank Bush Memorial trophy, Jeffers and Newton runners up.  Wallace and Tomlinson won the scratch event and Clouston and Hosie runners up.   A generous number of balls down the line were handed out to conclude the festivities of the day.