A day in Goulburn Murray Golf

It’s Sunday 15 May 2022, several golf clubs are playing their weekly competitions and some golfers recovering from their Saturday game.  For the Goulburn Murray Golf Association activities just keep on rolling.

The day started at Mooroopna Golf Club; where the great organisation of Junior Coordinator Alex Radevski and tuition from Mooroopna based professional Ben Weatherly, the first of the “come and try” Junior Clinics commenced.  Ben went through a range of golf shots starting with chipping to big shots at the range and a couple of holes before lunch was enjoyed.  There was also a whisper that the bag of goodies of tees, other golf stuff and lollies prepared by Alex were enjoyed as well.

The focus of the day then moved to Cobram-Barooga Golf Club where the second and final day of the Club’s Open Tournament and the Men’s Country Championships were in full flight.

The Cobram-Barooga course was in great condition receiving many compliments from players.  Similarly the assistance from Pro Shop staff certainly helped the organisation of both events.  Club Captain Matt Haddrell awarded the prizes for the Cobram-Barooga event which was won by Daniel Gill from Wodonga.  For our local District interest young Casey Chandler was runner up in the women’s handicapped event.  Another pleasing aspect was to see that all prize winners in the women’s event were all girls under 18 years of age.

For the Country Championships a Golf Australia event managed over the weekend by Jodie Kelly and Dylan Grandell, from the GA Events team, Daniel Gill repeated local Caleb Bovalino’s efforts of last year, to win both the Open and Colts Scratch events.  A magnificent second round saw Gill shoot a five under the card 66 which enabled him to get a two shot win over Mooroopna and past 2020 GMGA Champion Brett Kellow in the Open event.  In the Colts event it was Shepparton young gun Bailey Goodall who played consistent golf to take the runners up prize. 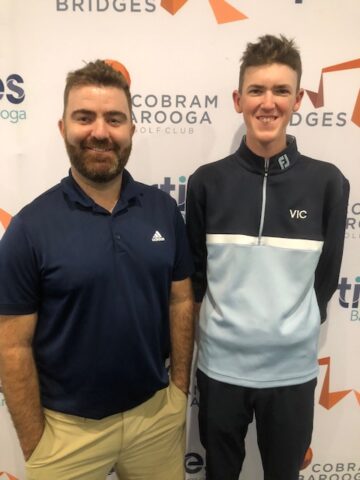 Golf events cannot happen without all the work and organisation behind the scenes and at the “coal face”.  For Sunday it was well done to all at Cobram-Barooga and Golf Australia.  However, the future looms and while all the golf was being played GMGA Men’s Captain Shane Halloran was hard at work with pen, paper and computer drafting the draw for the upcoming Sunday Pennant season and many women players were cleaning their clubs and shoes for their Pennant matches on Monday.

Golf at all levels and for all ages in the Goulburn Murray District continues.