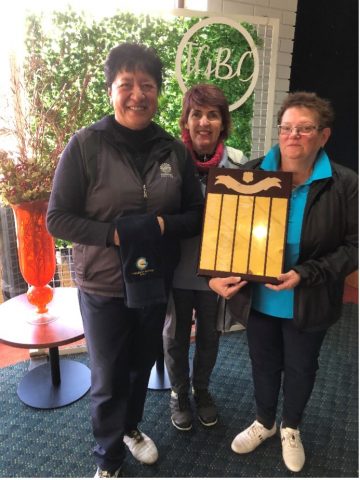 On a very cold damp day at Tocumwal the GMGA Joyce Broadbent Shield teams’ event was played in conjunction with the Tocumwal Bowl.  The field was smaller than hoped, however problems with entry form dissemination, cancelled golf in previous wet weeks and confusion about border crossing all were part of the reasons.  However, great support from Cobram-Barooga, Tocumwal and a team from Numurkah helped make the day enjoyable and worthwhile.

By far the best individual score of the day was from Tocumwal stalwart Bobette Wilkinson with 41 stableford points which of course provided a major contribution to her team.

Before presentations GMGA President David Roberts, welcomed all participants and highlighted the fact that the Joyce Broadbent Shield in honour of one of the greatest golfers from the District was first played in 1973 – a generation before Olivia Thompson a junior participant on the day – and won by a team from Parkland.

The major teams’ event was decided on countback with a Tocumwal Team of Bobette Wilkinson, Jo Boake and Denise Baldwin with a team score of 96, taking the major trophy and prizes ahead of a Cobram-Barooga team of Kerri Fisher, Susan Herbison and Terri Mentha.

A big thank you to Tocumwal GC for hosting the event and to Women’s Captain and GMGA Secretary Ros Seymour for her organisation.