The final of the Goulburn Murray District Fourball Pennant was played at the great Shepparton Golf Club.  Huge thanks must go to the host club for the presentation of the course, assistance with organisation and catering.

In the women’s final the Tatura Hill Top girls travelled to do battle with the Shepparton Gold team, the latter being favourites on their own track.  Bev Roberts/Bec Jeffers (HT) took on Sonya Hill/Lyn Cogger which turned into a tight match until the last few holes when Sonya described Bev’s putter “ran hot” and Hill Top notched up a 3/1 win. The second pairing played a see-saw match with a big lead to Hill Top early followed by a great catch up by Shepparton to hit the front after ten holes.  In the home run Larysa Phillingham/Laura Wills (HT) managed a 2/1 win over Evelyn Hunt/Ange McLeod.  In the final pairing Shepparton’s Anne Pegg/ Megan Carr who had played well all season maintained an up down battle against Sheryl Curran/Mandy McGrath with stories of Mandy playing well.  After eighteen holes they were locked even and as the result would have no bearing on the team outcome shaking hands all square was a fitting result.   Put those pair results together and it revealed Hill Top defeated Shepparton 2.5/0.5.

After a great lunch GMGA President David Roberts and Captains Mandy Faram and Shane Halloran conducted presentations at which Team Captains Anne Pegg and Bev Roberts thanked each other’s team for the attitude displayed by all players and in turn each player collected their Pennant prize with the Hill Top Team rewarded with the coveted flag to display in their club house. 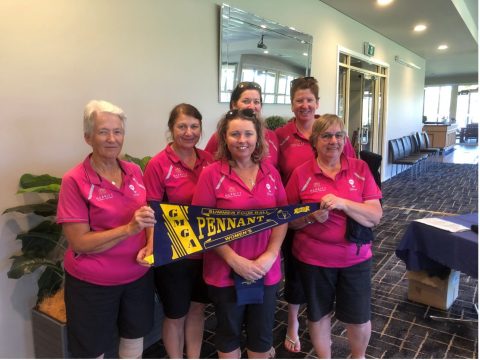 Josh Danaher/Scott Perry (HT) played well early to gain a lead and continued a steady approach after the turn to defeat Kevin Newton/Tom Martin (KC) 4/2.   Tom Estrada/ Tom Jeffery struck back for KC with a 6/5 win over Dylan (I left my shoes home) Burls/Col Barlow.  Mario Gagliardi/Dallas Hill kept the momentum going for KC with a win on the eighteenth over Jake Chessells/Daniel Mahar.  Meanwhile in the last pairings to hit off HT pair of Wellington brothers Linc and Bryce were keen to make it a quick match and avoid too much heat and turned it on to defeat Tim Gubbins/Peter Jeffery 6/5.  In terms of time it was the fourth pairing who were last on the course, with the gallery of spectators, the result of which was to determine which team won. Michael Mulcahy/Jono Kerrins (HT) were one up after the seventeenth over Allan Farrell/Jim Mallis (KC).  Kerrins smacked a great drive down eighteen and then played a steady shot into right of centre of the green. Mallis tried his best to chip close.  Two putts for Kerrins easy par and Mallis could not beat him.  HT maintained their one up lead and therefore three pair wins; to KC two.  Another flag for Hill Top.

At presentations GMGA President David Roberts repeated some of the thanks to Tim Watson of Shepparton GC for his help and to the two GMGA Captains Mandy Faram and Shane Halloran for their work and organisation of the season.  In addition Roberts added special mention to Kialla and Cosgrove Clubs for fielding a combined side for the season and to Hill Top Captain Michael Mulcahy for his work in organising two men’s teams who competed admirably in each Division over the season.   Overall a great effort by Hill Top for winning both the Men’s and Women’s pennants for the 2021 summer season.   Similarly special mention must be made of Hill Top pair Josh Danaher and Scott Perry who went through the entire season undefeated.  Josh also needs to thank his wife who is due to give birth to their first child “any time now” for not phoning to get home quick while he was playing the pennant final. 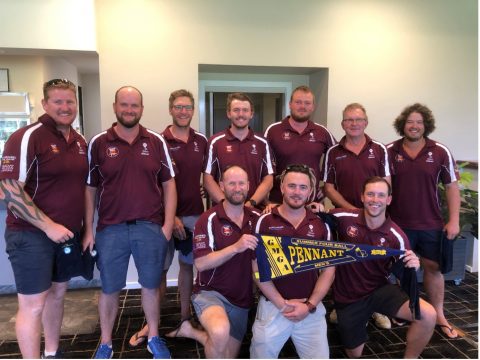 To cap off the day, the teams returned to Hill Top to celebrate and discovered that club colleagues Scott Carter and Andrew Wills had won the men’s section of the Victorian Fourball Qualifying Round played at Hill Top virtually at the same time pant was being played.    A big day for the Tatura golfers.