Results of each day have been posted on the website and emails sent to all club representatives in our association.  The following is a general summary of the total competition.

The overall results saw the GMGA Men finished second and the Women finished third.  Consequently both teams will again play in Division one next year.

It may have been day one that had the greatest impact on both Men and Women teams.  The men lost -4/3 to South Western and this was the only win for South Western District.  Our Women’s team lost -5/2 to Golf Peninsula in which three of the matches were lost on the 18th.  Golf Peninsula then went through the competition undefeated.

The GMGA Men’s team had two very strong wins against Golf Peninsula 51/2to 11/2and then 6/1 against Ballarat District which registered two wins above expectations.  The final day against Murray Darling District was a tough fought out encounter when again -4/3 loss which could have been the other way.  Golf is a game of margins.  Congratulations are well deserved by Murray Darling as their team created history being the first time the District has won in Division One and stopped GMGA going back to back.

The GMGA Women were extremely competitive and just slightly off the pace.  Only one loss to the eventual Division winners and then a great win over East Gippsland and two ties against Central District and North East District.

Team spirit was to the fore all the time and it was great to have both teams ate the same accommodation and dining venues to savour the stories of the day’s golf and accompanying highlights.

It is worth noting that in all of Division One Men only four players went through all four days with four wins and two were from GMGA in Matt Sellars who played in second spot all four matches and Daniel Adem who played in the number four position.  Matt Miller at number five had a very credible three wins out of four matches.  Four the women Steffi Vogel registered three out of four wins (and they were three big ones) and Tracey Clouston hit the event highlight with a 9/8 win.

Special congratulationsmust go to Steffi Vogel and Caleb Bovalina who have been picked in the Victorian Country Team to play South Australia in late November. 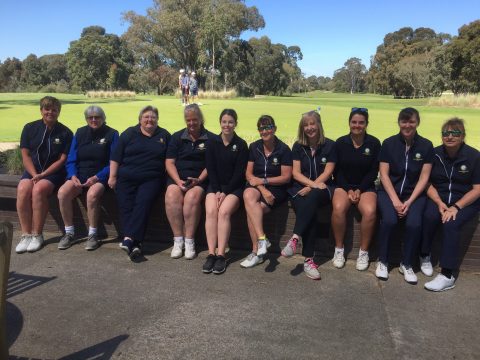 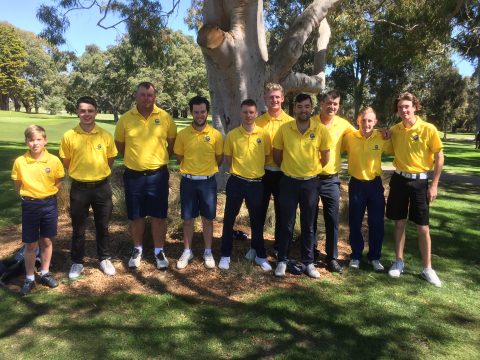 In addition to the serious golf there were some funny moments and non-golf highlights such as Men’s Team Captain Caleb Bovalina teaching Daniel Adem how to wash a shirt.  Hudson Storer accepting two “Cherryripes” from Team Manager for getting his father to win a match.  Felicity Booth becoming the driving expert to rescue Sandy Millett’s cart.

A couple of extra photos so that you can try to pick the caption:

How did the golf cart get in here?  Felicity you are a marvel which way should the wheels go.

Dad’s collapsed, but I’m still up and ready to go another 18 holes 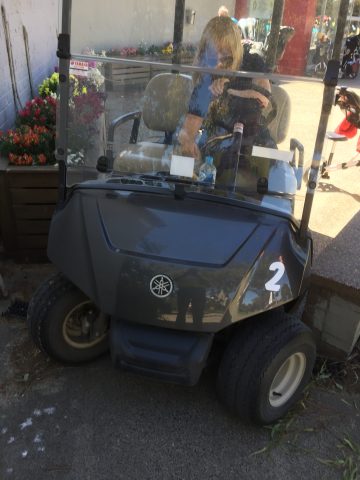 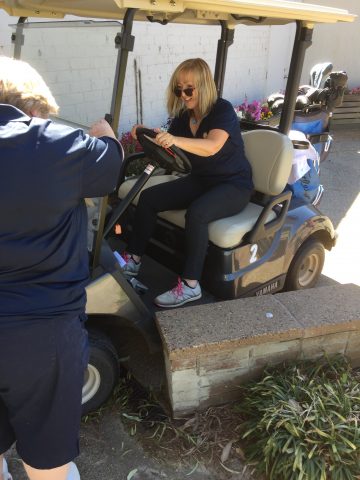 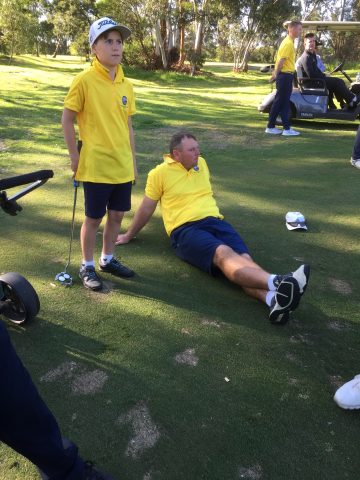