Over the weekend 18 and 19 May 2019 the Victorian Junior Boys Regional Teams Championships was played at Cobram-Barooga.

Although all the boys were disappointed with their scores, having all played well above their handicaps, they enjoyed the event and learnt from the experience.  The event is for boys under 18 years of age and while the GMGA team has handicaps that many older golfers aspire to they were up against some of the best in the state.

In the individual scratch competition Blair Christie (playing with coughs and sniffles) finished third with 71 and 78 = 149.  And while only five over the card for the 36 holes he was 11 shots behind the winner Matthew Crabbe (SW District) who shot 6 under the card 138.  Daniel Gill (NE District) was second with 147.

For the Teams Scratch Score (best of six members each day) GMGA finished third with 999 a huge 79 behind SW District on 920 and Peninsula 947.  Although the GMGA Boys scores were disappointing the total scores reflect the strength of the team from the South West (Geelong, Colac to Warrnambool).  In the Net Score Section GMGA finished fifth 37 shots behind North East.

On behalf of the GMGA I would like to thank the seven lads for their co-operation and efforts in representing our Association.  As mentioned above the boys were disappointed with their scores and found it tough going trying to master the Cobram-Barooga championship layout.   To add some perspective to all this.  In the Men’s event played in conjunction with the boys event, five players from the Victorian interstate team who were victorious in Hobart two weeks ago played in the event.  Only five players finished under the card and the winner was the under 18 Matthew Crabbe (SW District) who shot 6 under the card 138.

All GMGA clubs should be proud of the way our seven juniors represented our District.

Similarly, special mention should be made of GMGA member club Cobram-Barooga.  Their courses were presented in great condition at the end of a big week of golf and the support for the event and all teams and individuals was outstanding.  On behalf of the GMGA I thank Cobram-Barooga Sport Organiser Justin Speirani and Club Captain Wayne Gould, their grounds staff and all their helpers for their efforts and hospitality.

The Golf Victoria event, which incorporated the Cobram-Barooga Amateur Cup, will justifiably be held at the same venue next year.   Well done Cobram-Barooga.

The total event was organised and conducted by Golf Australia – Victoria and the GMGA extends a huge thanks to the “workers” Tim Witherow and Dylan Grandell supported by Therese Magdulski Senior State Manager and the interest and support provided by President of Golf Vic Stephen Spargo.

There is increasing incentive for GMGA Clubs to start and/or continue their junior programs as events such as this offer great opportunities for younger golfers.  To those involved this year (and still under 18 next year) keep practicing another opportunity may come your way. 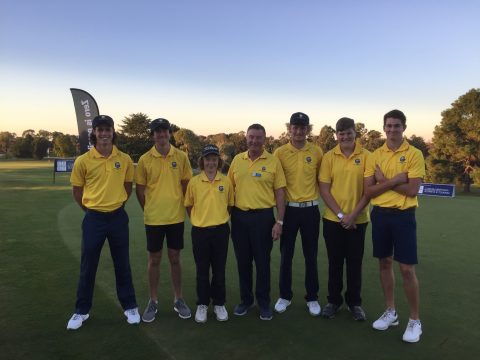